With the massive uptick in fintech adoption over the past few years, India is well and truly on its way to a digital banking and cashless payments future. But despite the massive opportunity, one of the hurdles that have slowed down growth is the friction in acquiring users. Not only do companies have to spend to get users transacting and using their platform, but there’s also the question of the know-your-customer (KYC) norms, which have posed a problem for fintech companies so far.

Having to physically conduct KYCs adds to the operational costs of startups and while Aadhaar-based KYC has been allowed in certain cases, there’s still a lot of friction when it comes to verifying users. But Reserve Bank of India’s (RBI) recent decision to allow companies to onboard customers remotely via video calls has made life much easier for startups. Fintech and digital non-banking financial companies (NBFCs) have called for this feature for years as a measure to cut costs in a massive way.

And with Covid-19 in the picture, businesses have no other option but to leverage digital onboarding or KYC tools. Cashing in on the opportunity and the new ruling is Delhi-based digital verification startup inVOID with its sector-agnostic eKYC and video-KYC SaaS tool.

The AI-driven platform claims to verify the authenticity of the documents uploaded by customers using facial recognition tools for video-KYC and automate onboarding. At present, the company conducts more than 15K KYCs on a daily basis, compared to pre-COVID times, where it was doing close to 6K KYCs per day. “We expect the same growth for the next quarter as well,” said Sarthak Goel, cofounder of inVOID. 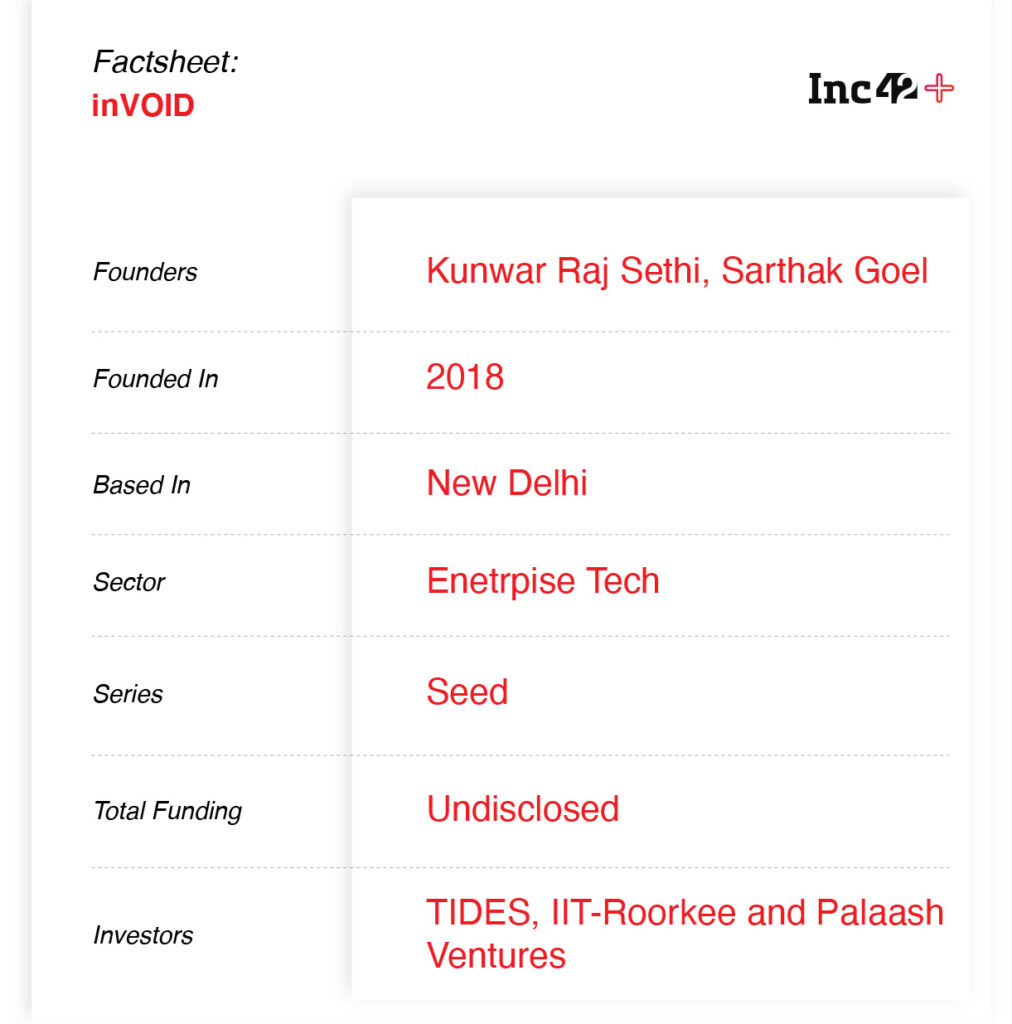 Currently, inVOID competes with startups such as Signzy, Yoti, IDfy, HyperVerge, Helloverify, Syntizen, SignDesk, Veri5Digital, and others in the Indian market. While many of these have already received early-stage funding, inVOID is banking on its plug-and-play integration solution that it offers to its clients across sectors, including financial, NBFCs, gaming, transport aggregation, rental and shared economy spaces among others. Raj said that in the digital verification landscape its AI models work even on 2G networks and in low bandwidth areas. It claimed that this enables companies to onboard users from the remotest of areas.

Throwing light on the future roadmap ahead of the company, Goel told Inc42 that in the coming months it plans to expand its engineering team, explore strategic partnership opportunities and expand to international markets, particularly in the SouthEast Asian regions, where it plans to explore alternate data sharing and sourcing options to build a seamless onboarding experience for companies.

On the product side, inVOID said that it envisions entering the credit segment where it will be providing users easy access to the credit ecosystem across the country, and also develop a lot of capabilities around forgery detection and checking fraudulent activity.

Since the ban of Chinese apps such as Cam Scanner, alongside 58 other apps, inVOID said that it is working on an alternative to the document scanning app for the B2C segment. Allowing users to scan, save, and store important documents, the company is looking to launch the product in the next few months.

“Our goal has always been to bring the best computer vision to the masses and make it more commercial, safe, and make it more sensible in terms of accuracy, authenticity, and accessibility. Going forward, we will continue to innovate and bring in some more products into the market,” said Goel.